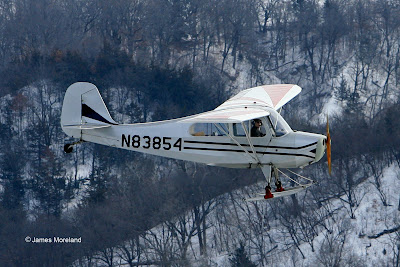 The 2011 BAPA Holiday Get-Together will be on Tuesday, December 6th, at the Iowa Stater Restaurant in the Gateway Hotel in Ames, IA. The Gateway is at the intersection of Highway 30 and University Boulevard...close to Jack Trice Stadium and Reiman Gardens.

Social hour begins at 5:30 pm, with dinner from 6-7:30 and our annual gift exchange/program afterwards. Please bring a nice gift in the $10 range that is labeled for a man, a woman or either. Feel free to get creative with your gift...both on the inside and outside. No gag gifts please...we want real stuff!

Dress is holiday casual or Cyclone fan, as you desire.

Below is a link to the Iowa Staters' menu, which you will be ordering off of. They are not offering their Tuesday night specials, but no worries...they have a wide range of items to choose from to fit every budget. And the food is very nice.

Please try to attend...especially if you have not yet made it to a BAPA event this year...and you know who you are!! :)

Feel free to encourage new and potential BAPA members to attend, and also invite friends and family to join you to meet some really super-duper people and have a fun evening of friendship and food.

Please RSVP to Lisa at lkkuehl@gmail.com or (515) 795-2306 by NOON on FRIDAY, DECEMBER 2nd. The restaurant would like to know how many to plan for. Children are welcome!

If anyone has any ideas for a program, entertainment, contests, etc. to liven up the party, pass them along to me or President Fran.

As always, weather dictates, so keep an open mind in case we are having a winter weather event. But let's not go there! I predict a lovely evening in Ames.

See everyone on the 6th!

http://www.iowastaterrestaurant.com/
Posted by Connie at 4:37 PM No comments: 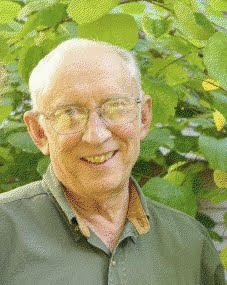 Buzz, known as the “go-to guy” when in need of excellence in mechanical solutions, life-long resident of Boone, passed away July 18, 2011. He was 68 years old and suffered from dementia in his later years.

Buzz was born August 15, 1942, to Marvin and Bertha Lauritsen of Boone. He graduated from Boone High School, enlisted in the National Guard and later attended Grand View College in Des Moines, all before returning to Boone to assist and later run his father’s insurance business.

As a life-long entrepreneur, he began working in the family ice cream shop, in adulthood taking on the family insurance agency, and later alongside his family, founding Cleaveland Aircraft Tool. Striving for perfection led him to design and create solutions to mechanical challenges that were both functional and beautiful. Building and rebuilding everything from toasters, to clocks, to steam engines, to airplanes, gave Buzz master craftsman status in the minds of friends and family.

Much of Buzz’s life revolved around his love for aviation, beginning by flying RC models as a child, then piloting passenger airplanes in 1970. He built his first full size aircraft in the mid ‘70s, and a second into the late ‘80s. Buzz served as Commissioner of the Boone Municipal Airport for 18 years, from 1980-1999, as well as a judge of homebuilt aircraft for more than 10 years at EAA’s annual fly-in held in Oshkosh, WI. Buzz’s RV-4 two-passenger, fully-aerobatic kitplane won EAA’s Grand Champion kit build award in 1989 and the Wright Brother’s award in 1990.

He was preceded in death by his sister, Martha, and his parents, Marvin and Bertha. He is survived by his wife, DJ, two children, Mike and Jensie, as well as their spouses, Christina and Bill, and granddaughter Mikayla.

A casual Memorial Celebration will be held at the Boone Municipal Airport, north hangar, on July 21 from 6 to 8 p.m. Memorial donations may be made to the family with intention of supporting music therapy for dementia patients. The family would also like to thank all of the friends and family and community members who have extended support and prayers during this challenging process.
Posted by Connie at 7:11 PM No comments: 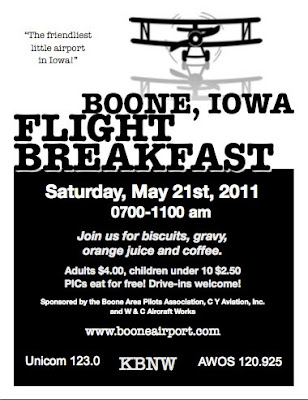 Posted by Connie at 9:24 PM No comments:

Chris Manthe of the Central Region FAASTeam will present a program on March 15 at 7:30PM at CY Aviation.

Program Title: Manipulation of the Flight Review: To change by artful means so as to serve one's purpose.

The meeting will be held at CY Aviation located at the Boone Municipal Airport. Thank you to the Boone Area Pilots Association.

4. Adam Danhauer’s letter was passed around thanking BAPA for the memorial donation of $100.00.

5. A care box was sent to Afghanistan filled with donated items of chap stick, small sample size of shampoos, lotions, etc. There were also some dog treats included because this box was sent to a canine unit. It was decided to continue collecting items to send another box as soon as this one is filled.

6. We are still planning on giving Susie Richmond’s 8th grade students the promised ride in a plane. Plans are to try to do this mid-late March.

7. New Business: Upcoming events:
Greenfield Chili Fly-In, on Jan 29th, 11-2 at the Iowa Aviation Museum.
The Farm Progress show is in Decatur IL this August 30, 31st. It would be nice for some of us to fly there to see how they handle the aviation traffic.
In September, the Blue Angels will be at the Lincoln NE Municipal Airport for an Air show Sept 10 & 11 commemorating the 10th anniversary of Sept 11th.
The Da Vinci exhibit will continue showing at the Des Moines Science Center until March 20, 2011.
RV Days is June 18th in Boone.
IA Falls fly-in breakfast omelets is July 4th from 7-10 AM.
“Thunder in the Valley”, Thunderbirds Air Show at Waterloo Airport, August 27, 28th.

8. Discussion was held on a flight breakfast hosted at CY aviation with the VFW providing sausage gravy and biscuits. This was tentatively set for May 21st from 7-10 AM
9. A sign up sheet was passed around for programs this year. There are still lots of opportunities for others to fill in the blanks.
January – Kelley K – WC Tour
February – Open
March-Open
April-Ron H
May-Bill D
June-Open
July-Open
August-Open
September-Open
October-Connie Y
November-Open
December-Christmas Party

Meeting was adjourned. Kelley K took us over to the North Hanger for a tour with Keith Campbell of WC Aircraft.