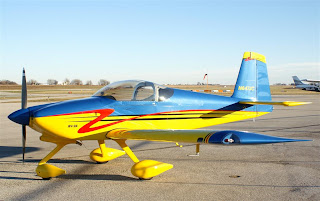 The construction of N647JC began in my garage in Woodbury, Minnesota, June 2002. Being a computer programmer, I had no experience building airplanes but I had just starteTd taking flight lessons and I thought building an airplane would be an enjoyable and practical project.

Before starting the project I spent several months researching kit airplanes and considered several makes and models including composite, fabric and aluminum construction. I decided on Van’s RV-9A for several reasons, aluminum construction tends to be less messy than composite and more temperature tolerant which can be a problem working in a garage in Minnesota. I also thought the RV-9A (considered the more docile model of the RV series), would be the best fit for me since I would probably still be a low time pilot by the time the project was finished.

The RV-9A kit airplane is typically purchased as 3 separate sub kits starting with the empennage. The empennage kit went together fairly fast although I didn’t work on the project that winter because my garage was just too cold and difficult to heat. The empennage kit is fairly inexpensive and lets the builder get some good hands on building experience before committing substantially more money for the wing and fuselage kits. After completion of the empennage I decided I was enjoying the building process and would continue on with the project. I decided on a quick build wing kit which would speed up the building process and avoid the dreaded fuel tank assembly which I had heard can be quite messy and difficult.

I worked on the fuselage for about 5 months until November of 2004 at which time it started getting cold again and I put the project on hold until spring. I didn’t get back to work on it until April of 2005 and I was able to work steadily on the project all summer up until October. That summer I had an opportunity and decided to move from Minnesota back to Des Moines, Iowa where I was originally from and in November of 2005 I made the move to Ankeny, Iowa, a suburb of Des Moines that has a very nice small airport. One of the requirements of my new home in Ankeny was a heated garage with a shop area so I would be able to work on my project in comfort year around.

It wasn’t until April of 2006 that I was able to get back to work on the project, moving can be quite disruptive. I continued working on the fuselage that spring and summer through October at which time I got pretty burned out and decided to take a break for a while. I guess getting burned out on a project of this size is not uncommon. I had been working on the fuselage for over 2 years and still had a long way to go before completion and I just wasn’t sure if I would be able to stick with it a couple years more. I considered selling the project but after a little inspirational pep talk from Keith Campbell at W&C Aircraft Works I decided to stick with it a bit longer. It wasn’t until the following spring, April 2007 that I got back to work on the project. 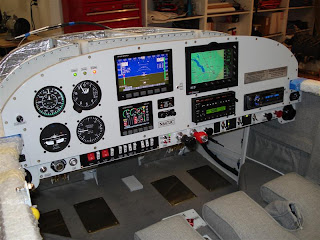 Work continued in my garage for the next 14 months including hanging the engine (a new Lycoming O-320), designing and building the instrument panel, wiring the fuselage and installing the interior. Finally in June of 2008 there wasn’t anything more to do except fit the wings and paint the project, neither of which I planned to do at home in my garage so,  time to move the project to W&C Aircraft Works in Boone.

W&C is a very unique and valuable resource to all RV builders in the area, they have a large hangar at the Boone Municipal Airport and they rent floor space to local RV builders for the purpose of construction, they offer a lot of experience and assistance if needed and they also have a paint booth, everything I needed to complete the project. Once the project got to W&C I continued on with the help of W&C fitting the wings and finishing up some remaining fiberglass work.

A couple months later In September the paint booth and Keith Campbell both freed up and painting the project began. I liked the paint scheme of Vans RV-9A demonstrator airplane so decided to do a similar scheme on mine. I’m not sure Keith was totally sold on the paint scheme or colors but he went ahead with what I wanted and we all think it turned out quite well. The painting process took approximately one month and Keith did an exceptional job as expected.

At the end of November, Keith Campbell who has logged a few thousand hours in RV aircraft made the first flight of N647JC for me. The flight lasted 40 minutes and no problems were found. Keith was quite pleased with the aircrafts performance and handling. Because of a scheduling problem, I was late getting my transition training which I need before I can fly the airplane. The 5 hours of transition training is required by my insurer and is just a good safe idea, after 6 ½ years of building, waiting a few more weeks to fly the airplane was not a problem. I have since completed my training and am looking forward to my first flight.

From start to finish this project took approximately 6 ½ years and a total of 2,240 hours of effort. There have been many RVs built in much less time but I never intended the project to be a race against time but rather a hobby that would keep me occupied for a few years. I originally estimated the project would take 4 years but I never committed to a completion date or deadline because then the project would become a second job rather than a hobby. 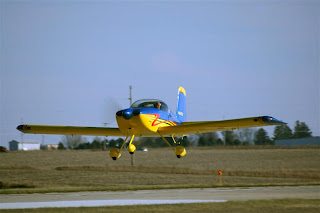 All in all, the experience of building my own airplane has been quite enjoyable and rewarding. I have not only acquired new skills and knowledge but more importantly I have made many new friends. The Boone airport including W&C Aircraft Works, CY Aviation and Cleaveland Aircraft Tool Co. has been a great resource for me and completing this project without them would have been very difficult if not impossible. I’m now looking forward to many years of enjoyable flying in my new RV-9A and who knows, maybe another airplane project in the future but not right away.